Authors of this video do not discuss the Stratiolaelaps sp. mites on these feral combs since they have not paid attention to it. If you look carefully at 3:50 of this video you will see whiteish almost see through small mites walking over the wax combs. Stratiolaelaps mites are not Varroa (which is brown-reddish). Stratiolaelaps mites are known to be feeding on Varroa mites as you can see in THIS post of mine. Feral colonies are not being treated by beekeepers and therefore Stratiolaelaps mites can establish them selves in such a colony. All Varroa treatments (except sugar dusting) are strong enough to knock off Varroa mites, and since Stratiolaelaps is also a mite it most defenetly get hammered by it. This alone is already a good enough reason for me not to treat bees. Bee colony (aka Super Organism) is a delicate and most complex system depending not only on the live bees but also on all sorts of micro-organisms, fungi and yeast within the hollow. As a matter of fact the hollow it self is the organism and combs are parts of it too. 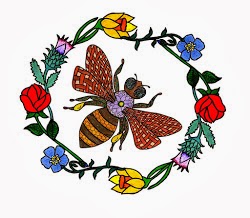